What is a Robotic Radical Prostatectomy?

The da Vinci robotic surgical system gives the surgeon a magnified, high-resolution, 3-dimensional view of the operating field, as well as improved dexterity compared to conventional laparoscopic (key hole) and open surgery. This facilitates surgery in difficult to access locations like the male pelvis, where the prostate gland is situated.

The potential advantages of robotic surgery are:

What are the alternatives to Robotic Radical Prostatectomy?

A pre-admission clinic appointment may be arranged 1-2 weeks prior to surgery, particularly if you have significant underlying medical conditions. Please make sure that you have had all your pre-operative pathology and radiology tests done before admission.

You will usually be admitted on the day of surgery. A small enema will be given to clear your bowel. You will be seen by the anaesthetist before your operation to discuss your anaesthesia and pain relief after the procedure.

What happens during a robotic radical prostatectomy?

The surgery is performed under general anaesthesia. 6 key-hole incisions (approx. 1cm) are made in the lower abdomen, through which a high definition 3D telescope, 3 robotic instruments, and 2 assistant instruments are introduced. In essence the operation involves removing the prostate gland (which is about the size of a golf ball) by disconnecting it from the bladder and urethra, and delicately freeing it from surrounding tissues, so that it can be extracted from the body by slightly enlarging one of the previously made key-hole incisions. In some men the lymph glands next to the prostate may be removed if there is thought to be a significant risk of tumour involvement. Afterwards, the bladder is reconnected to the urethra using fine sutures (see diagram below).

Critical tissues adjacent to the prostate such as the urinary sphincter (which controls continence), and the erectile nerves (which control potency) are preserved, provided that there is no suspicion the cancer has invaded into them. 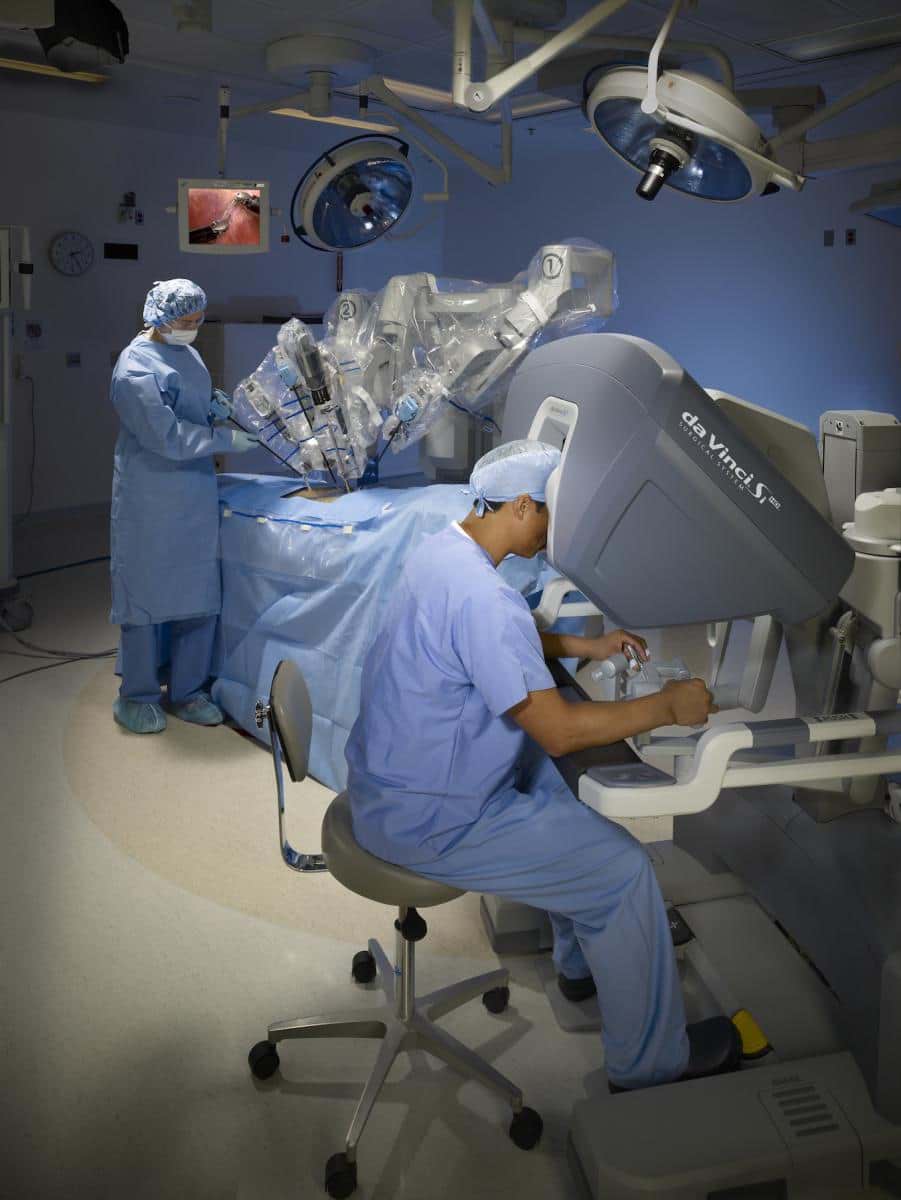 The da Vinci robotic unit, which is used to perform the procedure, is controlled at all times by the surgeon. The surgeon sits at a console (pictured) which provides the surgeon with a magnified, high-resolution, 3-dimensional view of the prostate gland and surrounding structures. Master controllers allow the surgeon to manipulate the miniature robotic instruments inside the patient's body, such that the instruments precisely mimic the surgeon’s natural hand movements. Thus, the robotic system does not perform the surgery by itself, but rather translates the surgeons hand movements to the robotic instruments. The improved visualisation and dexterity provided by the da Vinci robotic system, make many steps of the procedure easier to perform precisely, compared to conventional open or laparoscopic prostatectomy. However, based on currently published clinical studies, there is no general agreement that the outcomes of robotic prostatectomy are superior to traditional laparoscopic or open radical prostatectomy in terms of cancer control, or recovery of continence and potency after surgery. Also, be aware that no matter how small the incisions, robotic radical prostatectomy is still a major and complex operation, which typically takes 3-4 hours to perform.

When you wake from the anaesthetic, you will have a catheter (a tube that drains urine from the bladder) in the penis, a drain in your abdomen (another plastic tube) and an intravenous drip in your arm. You should expect some discomfort but this should be easily controlled using the pain killing drugs that you will be offered. You will be allowed to drink freely on the first day after the surgery and then progress to a normal diet depending on how you feel.

Most patients are ready for discharge with their catheter still in place after 1-2 days.

Your skin incisions will normally be closed using dissolving sutures, so usually there are no stitches to come out. The dressings can be removed 4-5 days after surgery. Typically, the abdominal drain is removed 1 day after the surgery but in some instances, it may be necessary to keep it in place for a longer period.

The catheter can only be removed when the join created between the urethra and the bladder during surgery has fully healed, so Dr Nathan must be consulted before it is removed. Usually an appointment will be made about 7 days after surgery for removal of the catheter. At this time an x-ray called a “cystogram” may be performed by injecting dye into the catheter to see that the join between the bladder and the urethra is intact. If this cystogram is satisfactory the catheter will then be removed. Occasionally, it may be necessary to leave the catheter in place for a few more days or weeks and repeat the “cystogram” before the catheter is ultimately removed.

What are the potential risks and complications of Robotic Prostatectomy?

The risks of robotic prostatectomy are much the same as those of open surgery. There are general risks associated with all types of surgery, such as the risks of Anaesthetic problems / complications which occur rarely e.g.:

Specifically, with robotic radical prostatectomy there are risks of:

It is important to be aware that the majority of these risks are not common, and that most of these with the exception of open conversion are also risks of the open radical prostatectomy.

You may be incontinent (involuntary leakage) of urine when your catheter is removed. This is usually temporary and will improve in the vast majority of men after a few months. Temporary urinary incontinence is relatively common after prostate removal because the valve (sphincter), which normally keeps you dry, is bruised and swollen and therefore does not always work well immediately after the operation. Therefore you may need to wear incontinence pads for some time following the surgery. The number of pads you need to use will reduce with time. Performing the pelvic floor exercises that you have been taught will hasten this recovery process.

Most patients achieve full dryness before 6 months after the operation but there are some who take up to 2 years. It is difficult not to be despondent when you leak urine but in 95% of patients this is temporary. If you are one of the unlucky 5% who have long-term incontinence, you can be made dry with another procedure which involves insertion of a male sling or an artificial urinary sphincter (an inflatable plastic cuff around the urethra).

Do not be afraid to experiment with erections and sex at any time after the operation once your catheter has been removed. Be aware that it can take up to 2 years for erections to return. This is because the nerves that supply the penis run right alongside the prostate and are bruised following the surgery. In some instances, the nerves need to be deliberately excised with the prostate to maximise clearance of the cancer which can result in permanent erectile dysfunction (impotence). You will find that intercourse will be much easier with adequate lubrication (e.g. KY jelly). You should also be aware that you do not need an erection to climax. Climax following a radical prostatectomy is dry (i.e. no seminal fluid is produced) but it is still pleasurable. You will not emit sperm after the surgery.

If you develop impotence after surgery, erections can be induced by using tablets such as Viagra, Levitra, Cialis, or injections of erectogenic medications into the penis if oral medications fail. If potency recovery is an important issue for you a rehabilitation program will be recommended that involves taking regular erectogenic medications such as Viagra, Levitra or Cialis to promote penile blood flow and health of the the penile tissues, until normal erections return. There is some evidence that early use of these medications improves and expedites erectile recovery. The chances of regaining erections either spontaneously or with tablets may be as high as 70% if you are very young with good erections before the surgery and if both nerves to the penis are spared. This chance decreases with increasing age, the presence of other illnesses such as diabetes and if the nerves providing the erections are deliberately removed. Again, note that these issues of potency are the same irrespective of whether a robotic, open or conventional laparoscopic prostatectomy procedure has been performed.

For men who develop permanent impotence after prostate removal, there is the option of surgical implantation of a penile prosthesis which is usually highly successful in restoring erectile function.

You can expect to drive about 2 weeks after surgery and typically resume all activities after about 6 weeks. You are only safe to drive when you are comfortable enough to brake hard and swerve quickly to avoid a possible accident.

After you leave the hospital you will be seen again at 7 days for removal of your catheter. You will then be seen in the rooms again at 6 weeks after the operation. The results of the histopathology (laboratory analysis of the prostate specimen) will be discussed with you then if this has not been discussed previously. Occasionally the report may indicate a “positive margin”. This does not necessarily mean that there is cancer left behind. Typically in this situation your progress will be monitored with regular PSA tests, but in some instances it may be necessary to recommend a course of radiotherapy in addition to the surgery.

The PSA level is a very sensitive indicator of recurrence after prostatectomy - a rising PSA level > 0.2 usually means that the cancer has recurred and additional treatment, such as radiotherapy or hormonal therapy, may be indicated. Your first PSA level will be checked 6 weeks following the surgery. You will then be seen every 3 months for a year, every 6 months for 5 years and then annually with a PSA taken prior to each visit. Some men who are stable can be monitored by their GP for convenience, from one year after surgery.

It is important that you understand what robotic prostatectomy involves and the risks and benefits associated with it. If you have any questions please do not hesitate to contact the rooms to discuss your concerns with Dr Nathan.

This information is intended as a general educational guide and may not apply to your situation. You must not rely on this information as an alternative to consultation with your urologist or other health professional.

Not all potential complications are listed, and you must talk to your urologist about the complications specific to your situation.